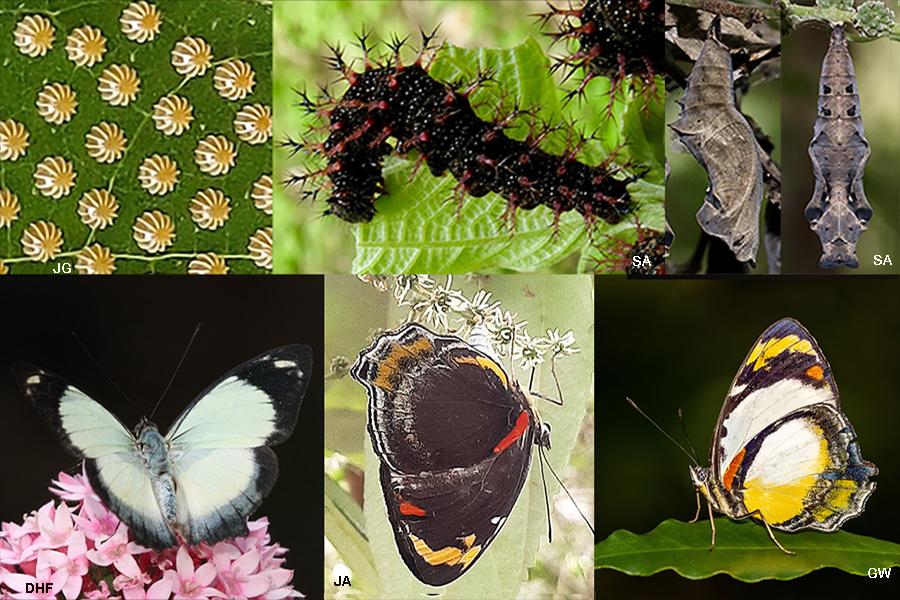 The Jezebel Nymph (Mynes geoffroyi) is often mistaken for one of our Jezebel butterflies (Delias spp), this. Admittedly, it is similar in size and, at first glance , similar in appearance to the local Black Jezebel (Delias nigrina). However, the antennae of our March species are proportionately longer than those of the Jezebels. Compare the hindwing and you will find that the outer margin (termen) is rounded on Jezebels while the Jezebel Nymph has what appears to be an irregular extension of the wing (not a tail) or what M.F. Braby calls in his field guide a ‘projection’.

All Jezebels belong to the Pieridae family while the Jezebel Nymph is a member of the Nymphalidae. With a wingspan of 50mm (male) or 57mm (female) the adults are easily sighted. Confusing is the fact that they come in a dark and a pale form as images of two female undersides show in our picture.

Jezebel Nymphs are not uncommon in Brisbane. They like rainforest areas and can often be seen along creek lines where their main larval host plant, the Native Mulberry (Pipturus argenteus) thrives. The immature stages also feed on Stinging Trees (Dendrocnide moroides and D. photinophylla).

Jezebel Nymphs are gregarious. They certainly likes company when in the immature stages. Eggs are laid in clusters of several dozens. Naturally, they hatch more or less at the same time, their larvae feed together, pupate in close vicinity of each other, and, of course, the adult butterflies emerge with not much time difference between them.