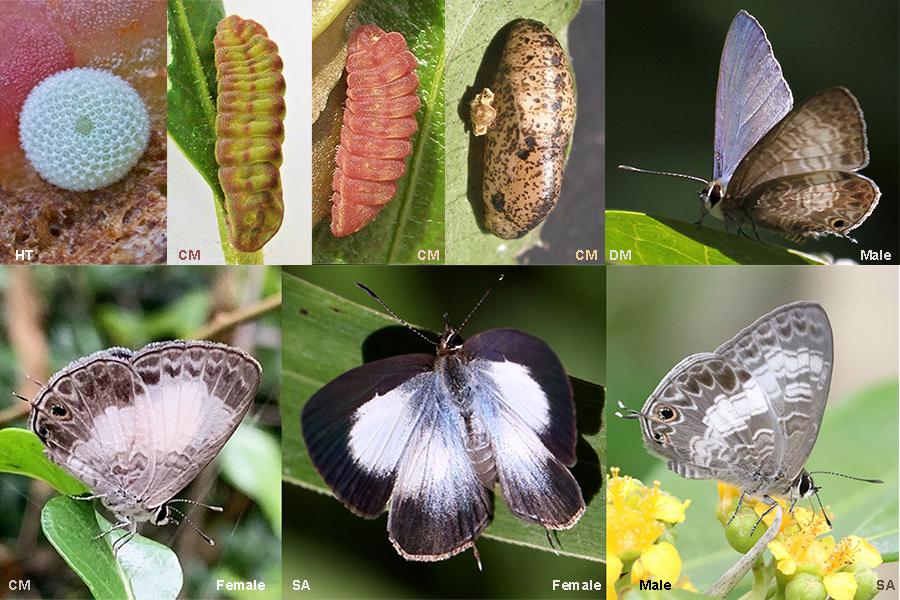 With a wingspan of 23mm for the male or 24mm for the female, this is one of our smaller butterflies, belonging to the Lycaenidae or Blues.

The White-banded Line-blue starts its life cycle as a tiny egg of not more than 0.5mm in diameter, round, flattened on the top, but with an intricate pattern made visible by macro photography. Eggs are laid singly or in pairs. The butterfly chooses flower buds and very soft young leaves for ovipositing. In our area larvae feed on River Mangrove (Aegiceras corniculatum), Muttonwood (Myrsine variabilis) and Tuckeroo (Cupianopsis anacardioides). Early instar stages are yellow or light green and start to have the above shown green with red stripes from about the third instar onwards. Amazingly enough, larvae take on the colours of their hosts. The reddish larva in the image above fed on Embelia curvinervia, a plant typical for the Northern Territories, and to a lesser extent the Cape.

The pupa is not more than 9mm in length, smooth in appearance (especially in comparison to other species introduced previously).

The adult males show an almost complete blue colour on the upper wing, sometimes with a tinge of mauve, while the females are black with a central white area on both wings, and some blue infused near the thorax.

The underside of Nacaduba kurava can’t be mistaken with any other species. Male and female have white broad meridian bands going across hindwing and forewing, albeit varying in width and by gender. The ground colour varies too. In the male it is light grey-brown, while the female shows a much darker brown and has the substantially wider meridian band. A black spot is located near the small tail, framed with an orange line inwardly and an iridescent green one towards the wing edge.