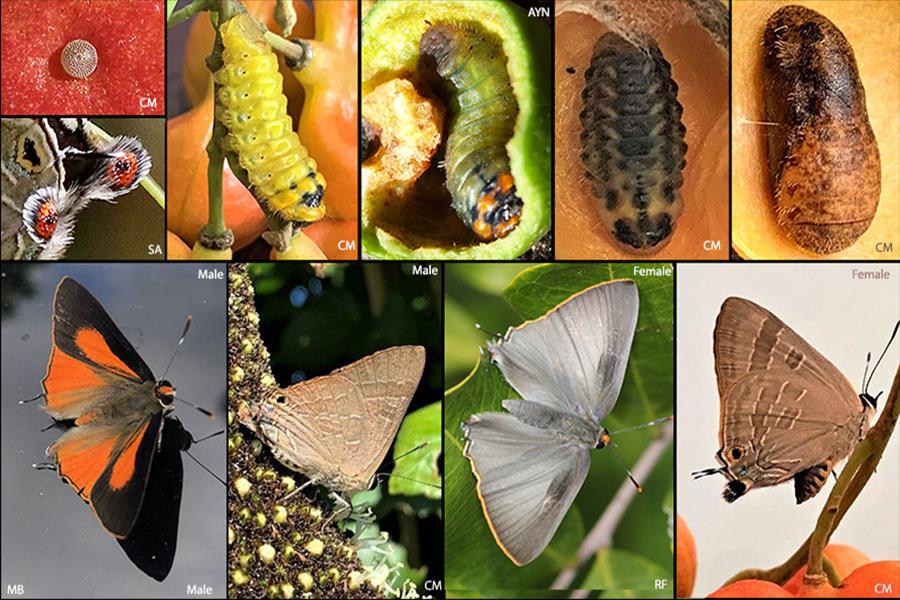 The Bright Cornelian (Deudoris diovis) is one of the larger butterflies within the Family Lycaenidae. The males have a wingspan of 30mm while the females reach 31mm.

The upper side of the male is striking with its bright orange colour which covers almost all of the hindwing, and in the case of the forewing a large almost triangular patch on the otherwise black forewing. The female’s upper wing, in comparison, is almost dull with its predominantly grey colour. The undersides of both genders are very similar. A pale brown colour dominates, with slightly darker wide bands running across the wings, bordered by a slim white line. A hint of turquoise is infused into the scale colours at the tornus (the posterior edge of the hindwing) next to a small black spot, surrounded by orange. The Bright Cornelian has narrow tails protruding from its hindwings as well as tornal lobes. They are black on one side, on the other they confuse predators with a dark eyespot on red, and with hair surrounding the lobe (see image in top left corner above, just below the egg photo).

The female lays single eggs (less than 1mm in diameter) on the fruit of its host plant or in immediate vicinity. The larvae feast on the seeds and go through their instar stages inside the fruit capsules where they also pupate. Each larva creates a small entry hole through which it enters after hatching from the egg. This round hole is used to discard faeces, and is also used to exit the shelter after the adult emerges. During the feeding stage the larva closes it again by using its anal plate. In the Brisbane area it has also been observed that larvae leave their seed pods to pupate in rolled up leaves or under bark or even stones at the bottom of the host plant. Among the local larval host plants are Tulipwwod (Harpullia pendula, see yellow early and brown mature instar images above), Macadamia (Macadamia integrifolia), Tuckeroo (Cupianopsis anarcardioides), Native Tamarind (Diploglottis australis), and Blue Quandong (Elaeocarpis angustifolius, see green instar above).