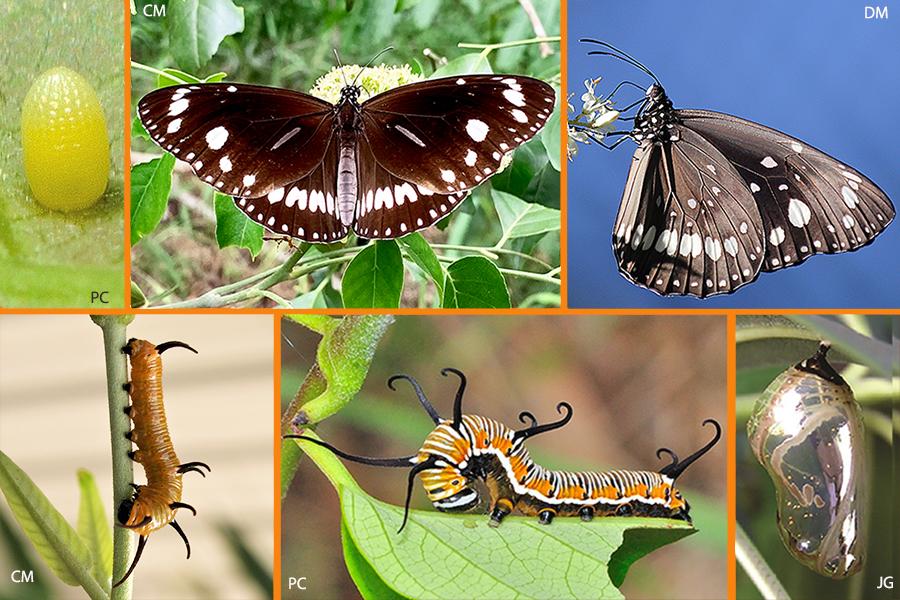 This butterfly is one of the species most often seen in Brisbane, be it in gardens or bushland settings. With a wingspan of 69mm for the male and 72mm for the female, it isn’t easily missed. The butterfly’s clear wing patterns with white spots on dark brown on the upper as well as the underside of hindwing and forewing distinguish it further from other species. Check out the images above and you will see the variations on both wings, and the additional small spots at the centre of the wings on the underside. Look closely, because you will discover the lighter coloured sex scales on the upper side of the forewings (the narrow lengthy markings clearly visible). When they are present, you’ll know that you have a male Common Crow in front of you.

While the adult butterfly prefers a rather sleek and elegant appearance, the offspring loves it more spectacular. The elongated eggs alone stand out. They are laid singly on the underside of leaves and flower buds of the butterfly’s host plant. While only having a diameter of 0.6mm, their height reaches three times that. Among butterfly fans it’s the larvae (caterpillars) that are much loved. Not only do they stand out with their colours ranging from orange in the early instar stage to a mixture of orange to orange brown and having narrow bands of black and white crossing each segment. From the first instar onwards, the larvae also exhibit four pairs of long tentacles, presumably to warn off potential predators.

You may have seen the pupa (chrysalis), a favourite of not only children. It has a metallic appearance, and for any young and imaginative mind this pupa may well hold something special. Who could argue with that.

This butterfly is very adaptable. Not only does it use a variety of habitats in Brisbane which is helped by the availability of many larval host plants. While we all know that the Common Crow larvae feed on introduced Oleander, Brisbane’s natural environment provides an abundance of native plants for the immature butterfly stages including Monkey Rope vine (Parsonsia straminea and P. brisbanensis), Current bush (Carissa ovata), various native figs including White Fig (Ficus virens), Small-leaved Fig (F. obliqua), and many more.

The adult Common Crow can be encountered in Brisbane throughout the year. Early life cycle stages are temperature dependent and development may slow down when temperatures are too low. According to Michael F. Braby, adults tend to aggregate in sheltered shady microhabitats during the dry season.