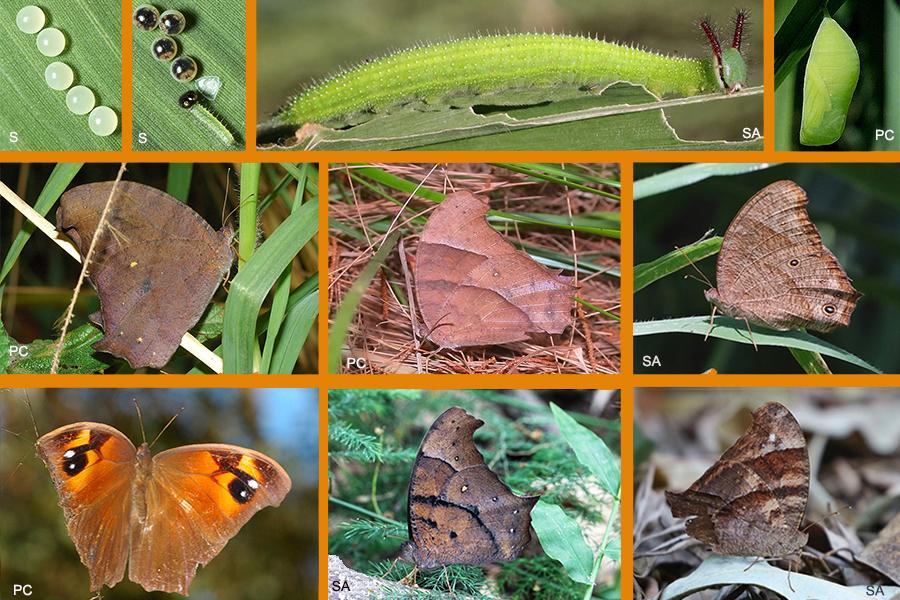 The Evening Brown (Melanitis leda) is a butterfly for all seasons. Walk through the bush at any time throughout the year, and you are bound to disturb an adult butterfly of the species. With a wingspan of 60mm for the male and 63mm for the female it stands out in size from other smaller members of the subfamily making up the Browns within the Nymphalidae family.

The butterfly starts its life cycle as smooth globular egg of barely over 1mm in size. The female lays her eggs on the underside of the blades of a multitude of native grasses belonging to the Poaceae and including Blady Grass (Imperata cylindrica) and Kangaroo Grass (Themeda triandra) as well as Common Reed (Phragmites australis), Swamp Ricegrass (Leersia hexandra), and also on many exotic grasses. The larvae are also known to use Carex spp from the Cyperaceae family as their host plants.

The immature stage of the caterpillar (larva) takes on a grass green colour and is covered in short fine hair like structures (setae) protruding from tiny white dots. The head is either reddish brown or green (but then with a brown band). It has two hairy horns as the image shows. Unfortunately, our photo doesn’t reveal it, but the tail end/anal segment of the larva is split into two prongs.

The chrysalis (pupa) is simple in structure and resembles in colour the larval stage. There are no special adornments or features like on those of other butterflies.

The larvae feed mostly during the day, however, you may more easily encounter the adult Evening Brown being active at dawn and dusk. During the day it seeks out shady areas and tends to move only when disturbed, and then usually flies only a very short distance before settling down again at ground level. The adults are known to indulge in the juices of ripe or rotting fruit at night.

What makes this butterfly particularly interesting is the variation of the adults during the wet and the dry seasons. Not only may the adult be 1-2mm larger during the dry (winter) season, it is stunning to see the variations according to the time of the year. Among them can be the ones depicted here. Variations of the wet season form can be seen in the middle row of our images, while the bottom row shows winter forms including on the upper wing side.

Images:
PC—Peter Chew; S– Sarpitabose—CC BY-SA 4.0; SA—Sylvia Alexander  -
A big thank you again for allowing us to use these photos.